Lacking the budget for antique collecting, I decided to become a forger of antique Japanese textiles.

The charming old art forger in the classic film How to Steal a Million, starring Audrey Hepburn and Peter O’Toole, simply cast himself into the mindset of a particular artist and created. So I imagined myself as a weaver in a medieval Japanese village.

Using hemp I had handspun in a rustic way, I warped up my Schacht Cricket loom. (Ignoring the plastic rigid heddle, its unfinished wooden styling looks rather medieval to me!). Hemp is plentiful in Japan so it was almost exclusively the cloth of the common people until cotton entered the country in the 1400’s. Side note: Bast fiber plants such as hemp and flax (linen) grow with the speed of a plant and the strength of a tree; their fibers make excellent warps.

But back to the scene of the crime! I began a simple weave into the brown hemp with cream colored Bluefaced Leicester wool that I had handspun in a mildly thick & thin manner. The two colors compliment each other in a perfectly lovely way.

But there is no such thing as a perfect crime, and every forger is said to slip up. My mistake: sheep do not thrive in Japan! Wool wasn’t present until the 19th century when contact with Europeans intensified.

Downhearted at my failure as a textile forger, I pressed on with the weaving. When I rolled the cloth off the loom, I discovered areas where the weft had missed some warp threads. (Lesson: Don’t weave with roughly textured fibers by candlelight).

Waste not, want not, I told myself. I threaded up a large needle with weft yarn and spent an evening weaving into the loose warp threads, strengthening the cloth. 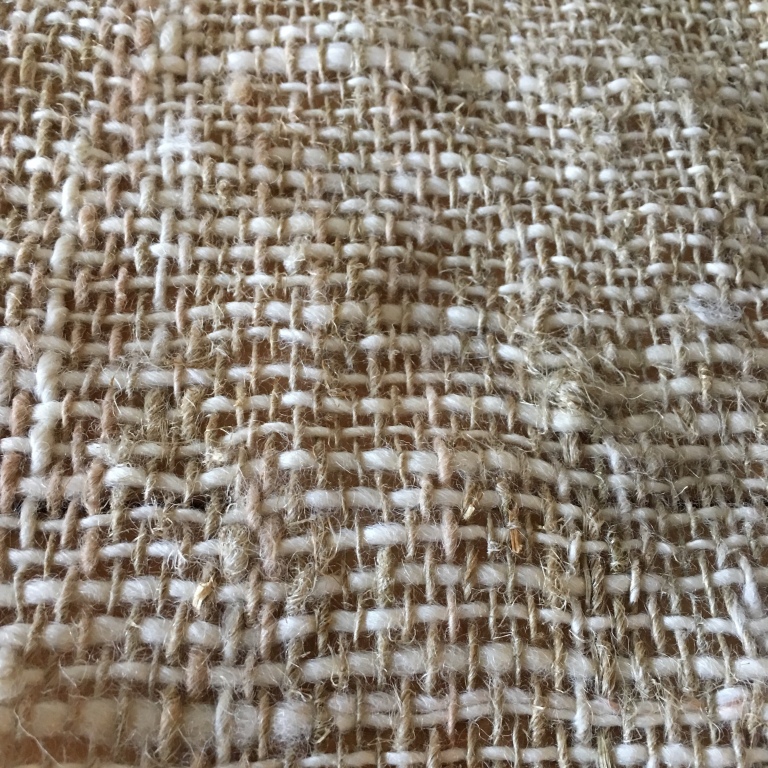 And guess what? There I was, doing what the rural Japanese traditionally did, stitching up a piece of fabric to strengthen it, re-weaving the cloth in spots to make it useable, and accepting and admiring the wabi sabi – the Japanese aesthetic concept of imperfection and transience – of the cloth that resulted. I ended up with my own personal version of a traditional Japanese textile, and I love it.